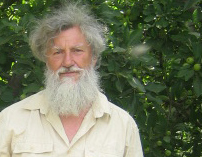 Jonathan Banks, WWF Climate Witness from Australia
© WWF Australia
My name is Jonathan Banks. I am a 63-year-old farmer from the town of Pialligo, near the Australian capital of Canberra. I moved to Australia from the United Kingdom in 1974 and bought a five-acre apple farm in 1984. It has been an orchard farm for over 50 years and for the last ten years it has been certified as organic.


English | 日本語 | 中文 | Italiano | Español | Русский | Dutch | Deutsch
I retired in 1999 from the Commonwealth Scientific and Industrial Research Organisation (CSIRO) where I worked as a research scientist on grain storage.

When I took over the orchard I used to do everything by the book with regards to spraying the fruit to combat pests. I found over time that the more spraying I did the more work there was. Slowly I went organic. The orchard was certified as organic 1994. The farm has always had a road side stall to sell the fruit locally, which is normally open four days a week.

Pests are becoming damaging
During the 1980s and early 1990s it used to be quite wet and we would have to pick apples between rain showers. It is not like this any more with decreasing rainfall.

I have kept records of when apple trees blossom and these days they come into bloom one week earlier than they used to. The growing season is longer too. It is drier and hotter. All this makes a big difference to the way I have to manage the orchard.

On the positive side, I can now grow Lady William apples due to the longer growing season. The season used to be too short for them to ripen. Now these apples blossom in early October and the fruit ripens the end of May or early June. And we get less fungus because of the hot, dry weather.

On the negative side, the pests are changing and becoming damaging. In the 1970s and 1980s there used to be only an occasional occurrence of fruit flies in the orchard. This has changed dramatically with the numbers of flies increasing every year due to warmer weather. In the past, the temperatures were too cool for the fruit fly to breed in large numbers. The worst year for fruit fly was 2005.

The trees and fruit get sunburnt these days because of a combination of water stress and higher UV rays.  I have to manage the sunburn by cutting off limbs that die and suffer the loss of good fruit.

A creak without water
In the past, the occasional fruit bat would lose its way and come to Canberra. Two years ago I had a large flock of fruit bats, maybe 60 a night, in the orchard. I expect them to be regular visitors now, which means I will loose more fruit. However, they are beautiful animals and I am willing to pay the price of losing some fruit in exchange for their company.

My creek no longer runs with water when it used to run continuously through out the year. I feel it is due to a lack of rainfall and increased temperatures, though land use change in the area may also be responsible. Less water may get to the creek. The very dry climate we now experience means I will have to start irrigating the orchard from the lake as early as spring, even when everything is in blossom. This was not the case in the past.

The impacts on the orchard from these changes include:

• The road side shop only being open one or two days a week due to less fruit to sell.
• In 2005, a third of the crop was lost due to fruit fly.
• The orchard requires more management which costs in time and effort.
• We are getting smaller size fruit and more ‘seconds’. Even with increased fruit prices, the farm is less productive and profitable.

I am seriously considering what else to grow with the change in weather. The orchard is over 50 years old and is still potentially productive in ‘normal’ seasons. It would take many years to replace it.

Jonathan's experiences are consistent with observations being made by orchardists across south-eastern Australia.  Increased pests in the growing season are consistent with warmer winter temperatures allowing over-wintering of pests and/or earlier hatching in spring. A longer growing season is the result of increasing growing degree days. Damaged fruit due to high temperatures and radiation is probably due to a decrease in cloudiness that accompanies lower rainfall.

The lower rainfall of the past decade has contributed to prolonged drought conditions, affecting his creek and orchard. Although this decrease is likely a combination of natural climate variability and climate change affecting rainfall, higher evaporation is driven by lower humidity, higher temperatures and less cloud.

Fruit bat migration may be affected by factors other than climate (e.g., permanent colonies and food sources in southern Australian cities), although their southern presence may also be influenced by warmer conditions.

In summary, these impacts almost certainly have a global warming component, but natural climate variability contributing to drier conditions may also be playing a part.

All articles are subject to scientific review by a member of the Climate Witness Science Advisory Panel. 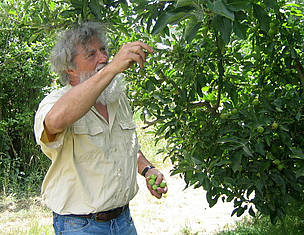 Jonathan Banks on his farm
© WWF Australia Enlarge
Like this article?